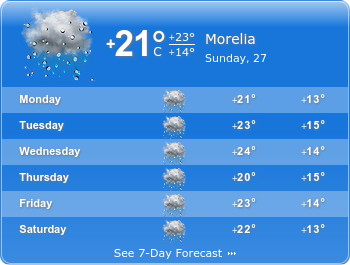 Morelia is a city and municipality in the north central part of the state of Michoacán in central Mexico. The city is in the Guayangareo Valley and is the capital and largest city of the state.

The main pre-Hispanic cultures here were the Purépecha and the Matlatzinca, but no major cities were founded in the valley during this time. The Spanish took control of the area in the 1520s. The Spanish under Viceroy Antonio de Mendoza founded a settlement here in 1541 with the name of Valladolid, which became rival to the nearby city of Pátzcuaro for dominance in Michoacán. In 1580, this rivalry ended in Valladolid’s favor and it became the capital of the colonial province.

After the Mexican War of Independence, the city was renamed Morelia in honor of José María Morelos, who hailed from the city. In 1991, the city was declared a UNESCO World Heritage Site for its well preserved colonial buildings and layout of the historic center.

With a consistent colonial-style throughout, Morelia is one of the most beautiful cities in Mexico. It is not really on the well-trodden path of the leisure tourists and so you can walk around in comfort without fear of the bermuda shorts crowds. Morelia is the capital of the state of Michoacan in Mexico and it is a registered UNESCO World Heritage site. There are at least two "information" booths in the area of the square. They are staffed with multilingual students who are very helpful.

Morelia is the capital city of Michoacan. It serves government and many students attending school there. The central business district is very clean with plenty of places to eat and shop. Tourists are not as common here as some other areas of Mexico. You may want to load up on pesos before ordering food or trying to make a purchase, as foreign currency is not widely accepted. There are money changer stalls on the side streets off of the square.

It has a decent climate, nice parks to relax in, lots of places to get stuff, and very nice place over all. If you stay downtown, most of the attractions like the Cathedral, the square, museums, and shopping, are all pretty much within walking distance. Due to Morelia's location, being a college town and center of State Government, tourist are not as common as some other areas of Mexico. The People are very friendly. In the central business district, drivers use their horns 24 hours a day to excess, prodding other drivers and to give notice at the numerous blind intersections. You will get used to it, but request a room away from the street.

Human settlements in the Guayangareo Valley in which Morelia is located have been dated back as far as the 7th century. Artifacts found here have shown Teotihuacán culture influence on early cultures in this area. In the 12th century, the Purépecha arrived in the valley. They dominated it politically for the rest of the pre-Hispanic period but did not build any major settlements here. Between the 12th and the 15th century, Matlatzincas moved into the area with permission of the Purépechas, who were based around nearby Pátzcuaro Lake. The main Matlatzinca settlement was where Júarez Plaza in the city is today.

The Spanish pushed into the Guayangareo Valley between 1525 and 1526, headed by Gonzalo Gómez. In the 1530s, the area was evangelized by Franciscans such as Juan de San Miguel and Antonio de Lisboa.

What would become the city of Morelia was founded by Viceroy Antonio de Mendoza and a number of encomenderos in 1541, who first named it Nueva Ciudad de Mechuacan (New City of Michoacán). The newly founded settlement grew quickly, prompting Vasco de Quiroga to go to Spain and procure for rival settlement Pátzcuaro the title of city and a seal, to prevent “new city” from becoming the capital of Michoacán. The action also required that the new settlement change its name to Guayangareo . In 1545, Guayangareo gained city status from Charles V in 1545 with the name of Valladolid, after the hometown of Antonio de Mendoza. This was part of a power struggle between Antonio de Mendoza and Vasco de Quiroga over the province of Michoacán. During Quiroga’s lifetime, he managed to keep political and ecclesiastical power in Pátzcuaro despite the viceroy’s and encomenderos’ objections. However, Quiroga died in 1565. By 1580, both political and religious authority  had been transferred to the city of Valladolid, moving the College of San Nicolás, which Vasco founded and laying the groundwork for establishing a new cathedral for the province.

The 17th century saw growth for Valladolid, with the construction of the cathedral and aqueduct. The cathedral was begun in 1640 (finished in 1744) and the aqueduct in 1657. During the 17th century, many of the city’s large churches and monasteries were established, such as the monasteries of San Francisco, San Agustin, El Carmen and La Merced as well as the convents of Las Rosas, Las Monjas and Capuchinas. Churches include La Compañía, San Juan and La Cruz, but the most important structure built during this time period was the Cathedral. The location of this cathedral defined the composition and development of the city from then on.

At the end of the colonial period, Valladolid was a small city with about 20,000 inhabitants. It was also an educational center with four important schools such as the College of San Nicolás. These schools would turn out scholars such as Miguel Hidalgo y Costilla and José María Morelos y Pavón, who were sympathetic to the new republican ideas coming out of post-revolution France and United States. Demonstrations against Spanish rule had been occurring in the town in 1809, culminating in the Conspiracy of 1809. This plot was discovered, with the main conspirators were arrested and sent to other parts of New Spain, which helped to spread republican ideas.

One year later, after forming his army in Guanajuato state, Miguel Hidalgo y Costilla arrived and took over the city, proclaiming the end of slavery in Mexico. The city was taken back by royalist forces soon after. Morelos came here to try and dislodge the royalists but was defeated by Agustín de Iturbide. Another prominent figure in the war, Mariano Matamoros was shot by firing squad on the city’s main square in 1814. The city remained in royalist hands until 1821, Iturbide, who had switched sides, and Vicente Guerrero entered the city with the Trigarante Army.

In 1828, the newly created state of Michoacán changed the name of the city from Valladolid to Morelia, in honor of José María Morelos y Pavón. This is the official name it retains today, although its Purépecha name remains Uaianarhio and has had nicknames such as City of Pink (Cantera) Stone, the City of Open Doors, The Rose of the Winds, The Garden of New Spain and religiously as Morelia of the Sacred Heart of Jesus. The city became a municipality in 1831.

The later 19th century is marked by struggles between liberal and conservatives forces in Mexico. During the Revolution of Ayutla, the city was taken by rebel forces under Epitacio Huerta and General García Pueblita, but was taken back in 1855 by forces under Antonio López de Santa Anna. Rebels attacked Santa Anna’s troops again a year later. French troops imposing imperial rule entered the city in 1863, with the republican forces moving capital of Michoacán to Uruapan while conservative families in Morelia pledged support for emperor Maximilian I, who then visited the city. In 1867, the city is taken by republican general Nicolás de Régules and the capital of Michoacán returned to Morelia. In 1869, during a rebellion against Benito Juárez’s government, General Epitacio Huerta attacked government positions in the city but were beaten back by forces under Mariano Escobedo.

The first factories were opened in the city between 1868 and 1870, along with the first telegraph line. The railroad followed in 1883, as well as street cars.

In 1910, celebrations are held for the centennial of Independence but tensions are high in the city due to the shortage of grain and the continuation of PresidentPorfirio Diaz in power. One year later, revolutionaries loyal to Francisco I. Madero are welcomed into the city. In 1914, the capital was moved from Morelia to the city of Tacámbaro. The city was then taken by forces under General Sánchez in the same year, and by forces loyal to Francisco Villa in 1915.

In 1920, the Palace of the State Government was briefly taken over by farm workers and others from all over the state. Isaac Arriaga is assassinated here in 1921. The city is attacked again by rebels calling themselves “Delahuertistas” in 1924. The fight mostly occurs in the main plaza with the city defended by General Lopez, Garcia and Avila Camacho.

During the 1960s the street vendors were removed from the historic center of the city, and palm trees that lined the Avenida Madero, the main east-west road, were cut down. In 1966, there was a student revolt at the state university which was put down by the army.

The 1970s and 1980s are marked by construction including the Periferico bypass ring around the city. During the 1980s, damage due to geographic faults, exacerbated by falling water tables from groundwater pumping is noticed. This problem is similar to problems faced by other cities on the Trans-Mexican Volcanic Belt such as Querétaro and Mexico City.

In 1991, the city was declared a UNESCO World Heritage Site due to its well preserved colonial architecture. In 2001, street vendors were moved again from the historic center to make the area more tourist-friendly. Traffic was rerouted from here as well with the construction of new bypasses. In 2006 and 2007, many of the plazas and gardens in the historic center were remodeled.

In 2009, the Morelia metropolitan area was tentatively established as consisting of the municipalities of Zinapécuaro, Álvaro Obregón, Charo, Tarímbaro and Morelia. This initial determination was made by the Secretary of Urbanism and Environment, with further refinements to be made as the municipal presidents of these entities meets to discuss limits, strategies and further actions. One of these actions has been to establish a formal commission to administer the area.

Buy a Telemex Ladatel prepaid calling card. They are available in many places, including convenience stores and bus station kiosks, and can be used in pay phones throughout Mexico. Using the cards can result in substantial savings, and is a sure way to prevent overcharging that can occur with collect or credit card calls. Ladatel cards are available many places on the square.

Travel Helper helps people to take full advantage of modern communication to find out what they want about all countries of the world, cities, ski resorts and beaches.